Jake Brander Entrepreneur of the Year Finalist in 2022

Ernst & Young LLP  announces Jake Brander was named the Entrepreneur Of The Year Pacific Southwest Award finalist in 2022.  This is one of the preeminent competitive business awards for leaders and entrepreneurs of fast-growth companies with executives who take risk and think big to succeed.

Jake Brander was chosen by a panel of independent judges from a group of thousands of entrepreneur’s based on entrepreneurial spirit, purpose, growth and impact, in addition to other important contributions and attributes.

As the world’s most prestigious award for entrepreneurs who run game-changing businesses, Entrepreneur Of The Year has been at the forefront of identifying forward thinking business leaders for over 35 years. The program has honored the inspirational leaders and entrepreneurs as Reid Hoffman and Jeff Weiner of LinkedIn Corporation, Howard Schultz of Starbucks Corporation and Sheila Mikhail of AskBio.

“To be considered as a finalist for the EY award is surreal. We often fly under the radar, and it feels great to be recognized for such a prestigious award. It really demonstrates that the judges were able to see the impact we are making in this world – stated Jake Brander”

Regional award winners will be announced at an awards ceremony at the Waldorf Astoria in Data Point, California on June 17th, 2022. The regional winners will qualify to be considered for the National awards in November at the Strategic Growth Forum. The Entrepreneur Of The Year National Overall Award winner will then move on to compete for the EY World Entrepreneur Of The Year Award in June 2023. 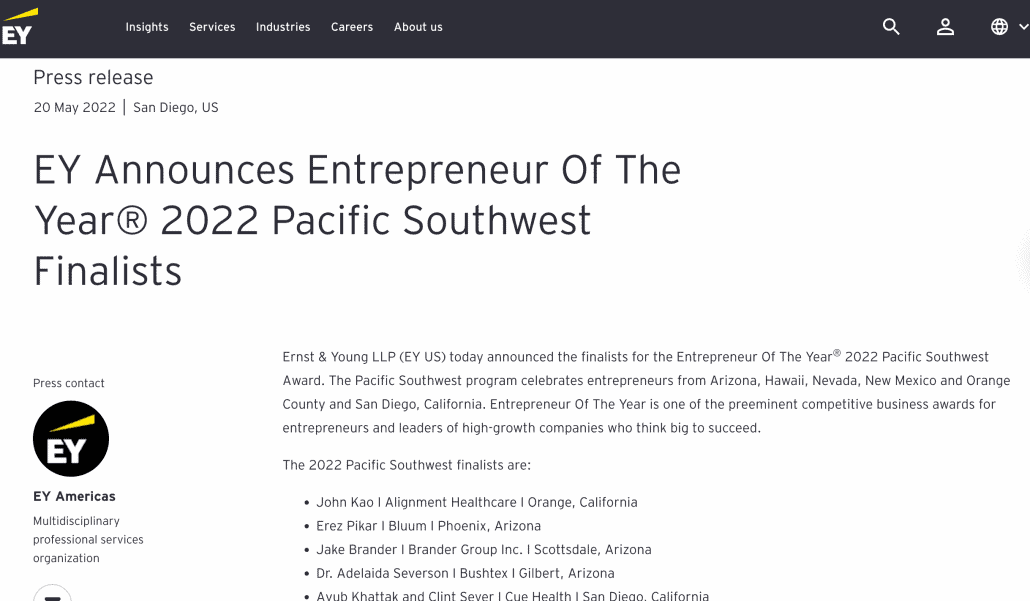 About Entrepreneur Of The Year®

It celebrates entrepreneurs through regional and national awards programs in more than 145 cities in over 60 countries. National overall winners go on to compete for the EY World Entrepreneur Of The Year™ title. ey.com/us/eoy

Information for IPv4 addresses ranging from a /24 up to /12s

Get a Free Consultation

Contact Us Today
Scroll to top
We use cookies on our website to give you the most relevant experience by remembering your preferences and repeat visits. By clicking “Accept”, you consent to the use of ALL the cookies.
Do not sell my personal information.
Cookie SettingsAccept
Manage consent

This website uses cookies to improve your experience while you navigate through the website. Out of these, the cookies that are categorized as necessary are stored on your browser as they are essential for the working of basic functionalities of the website. We also use third-party cookies that help us analyze and understand how you use this website. These cookies will be stored in your browser only with your consent. You also have the option to opt-out of these cookies. But opting out of some of these cookies may affect your browsing experience.
Necessary Always Enabled
Necessary cookies are absolutely essential for the website to function properly. These cookies ensure basic functionalities and security features of the website, anonymously.
Functional
Functional cookies help to perform certain functionalities like sharing the content of the website on social media platforms, collect feedbacks, and other third-party features.
Performance
Performance cookies are used to understand and analyze the key performance indexes of the website which helps in delivering a better user experience for the visitors.
Analytics
Analytical cookies are used to understand how visitors interact with the website. These cookies help provide information on metrics the number of visitors, bounce rate, traffic source, etc.
Advertisement
Advertisement cookies are used to provide visitors with relevant ads and marketing campaigns. These cookies track visitors across websites and collect information to provide customized ads.
Others
Other uncategorized cookies are those that are being analyzed and have not been classified into a category as yet.
SAVE & ACCEPT